This website relies on industry-wide support. The good news is the information we supply can be unquestionably independent. The downside is we must have the support of the sweeping community at large to keep WorldSweeper.com up-to-date and online.

Because of the relatively small size of the sweeping industry, we need financial support from all areas of sweeping: manufacturers, contractors and the other vendors and suppliers of power sweeping equipment. If you like what you see and value the site, please support it via the low cost enhanced listings in our Contractor Locator and Browse Sweeping Products sections.

If you would like to support the site through a donation of any amount, via either PayPal or a credit card, just click on the donation link shown below.

If you would like more information, or to provide your input and ideas on the World Sweeper concept, please contact us via one of the methods shown in the left column of this page. We're trying to represent all viewpoints in the sweeping industry, so please feel free to let us know yours. 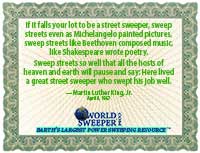 "If it falls your lot to be a street sweeper, sweep streets even as Michelangelo painted pictures, sweep streets like Beethoven composed music, like Shakespeare wrote poetry.

"Sweep streets so well that all the hosts of heaven and earth will pause and say: Here lived a great street sweeper who swept his job well."